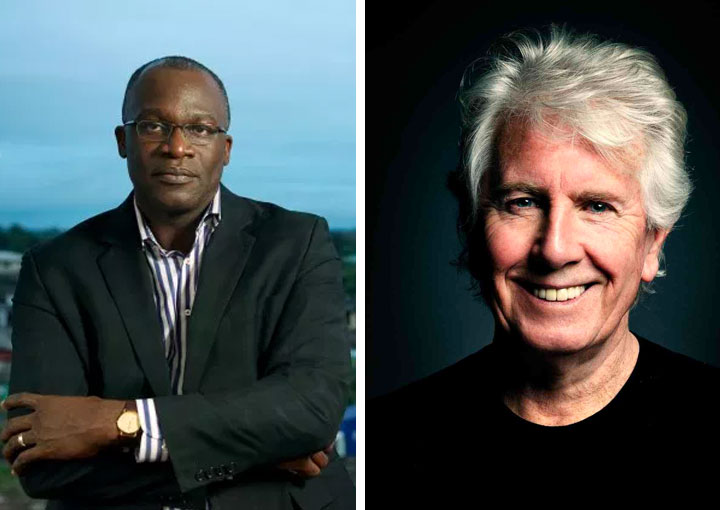 Atlanta, October 3, 2018 – Imcon International Inc., the developer of the Internet Backpack, a remote connectivity solution that allows users to be able to communicate from almost every location on the planet, has added iconic musician and philanthropist Graham Nash and senior telecom industry executive Ben Wolo to its advisory board. The announcement was made today by Dr. Dale W. Meyerrose, Chairman of the Board, Imcon International.

“We are delighted to welcome both Graham and Ben to our Advisory Board,” said Dr. Meyerrose. “There are few individuals on the planet as successful as Graham Nash at seamlessly melding artistic preeminence and large-scale philanthropic impact. He is a true global treasure and we are honored to have him join our team. Ben Wolo is one of the foremost experts in his field, particularly in the EMEA region. The work he has done in Liberia is nothing short of awe inspiring. Ben’s leadership will be instrumental as we begin to implement our recently announced partnership with Syracuse University’s School of Information Studies to take internet connectivity in Liberia from the current penetration rate of about 7% to 40% by 2021.”

Graham Nash, one of the most successful and acclaimed musicians of his generation, is a two-time Rock and Roll Hall of Fame inductee – with Crosby, Stills, and Nash and with the Hollies. He was also inducted twice into the Songwriter’s Hall of Fame, as a solo artist and with CSN, and he is a GRAMMY Award winner.

For nearly half a century, Nash’s passionate voice has rung out in support of peace and social and environmental justice. In 1979, he was one of the organizers of The No Nukes/Musicians United for Safe Energy (MUSE) benefit concerts. In 2011, Nash was instrumental in bringing MUSE back to the forefront with a concert to benefit Japan disaster relief and groups promoting non-nuclear energy worldwide. In 2010, Nash was appointed an Officer of the Order of the British Empire (OBE) by Queen Elizabeth.

“I am joining for one reason, I believe deeply in this mission,” said Mr. Nash. “Imcon’s initiative in Liberia will bring positive, groundbreaking change to tens of thousands of lives, many of them children. They are the paradigm of ‘doing well by doing good.’ I am thrilled to be a part of this effort.”

Ben Wolo has over twenty years senior telecommunications experience working extensively in the area of Technology Management, Engineering and Operations with expertise in large-scale ICT infrastructure projects, business development, and program delivery. He had key involvement in the implementation and delivery of multi-million dollar projects within the Europe, the Middle East, and Africa (“EMEA”) region including the groundbreaking delivery of the $700 million trans-continental ACE Submarine Cable System. He has worked with multiple global network infrastructure companies, including Facebook as a member of their EMEA Infrastructure Product Partnership team.

In 2007, Mr. Wolo was recruited by the President of Liberia to rebuild that nation’s telecommunications infrastructure that was totally destroyed by Liberia’s civil conflict. He played a prominent role in reforming Liberia’s Telecommunications sector by leading the effort to draft the Liberia Telecommunications Act of 2007. Mr. Wolo will advise Imcon on networking and technologies as well as logistic and network deployment in emerging markets with focus on Sub-Sahara Africa.

“Imcon’s singular strategic vision of bringing internet connectivity to the 3.5 billion people in the world who do not currently have it is inspiring and galvanizing,” added Mr. Wolo. “With the technological and business expertise at hand, they are well positioned to make that vision a reality. I look forward to contributing and helping the company achieve its far-reaching objectives.”

Imcon International, Inc., is an immediate connectivity solutions provider. Imcon is developing edgeware services and device solutions, such as the Internet Backpack, which conform to the Open Specifications Model for the Internet of Things v0.5. The Internet Backpack is a remote connectivity solution utilizing narrow-bandwidth utilities which allows users to be able to communicate from almost every location on the planet. The Internet Backpack also allows users to create internal wireless networks with large coverage areas utilizing various radio frequencies. Please visit http://imconintl.com for more information.